22- A Brief History of Time 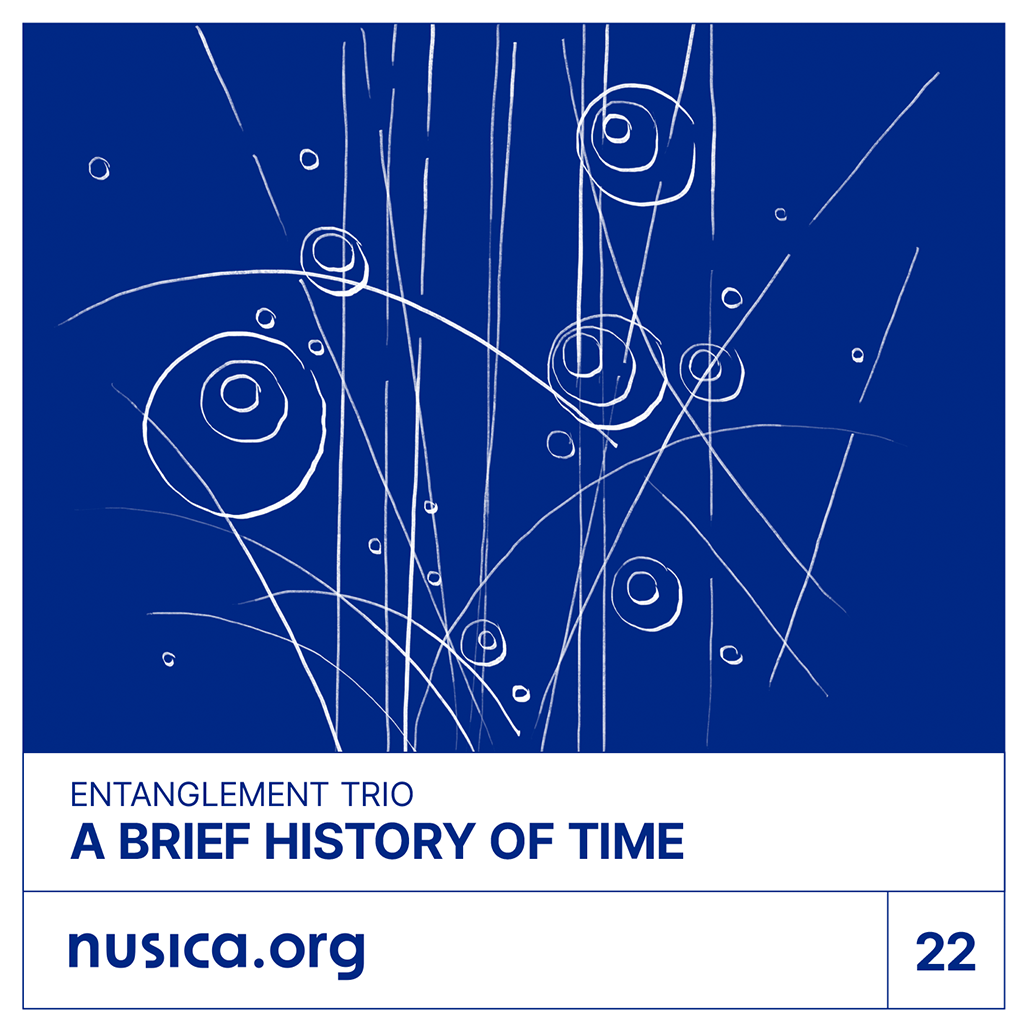 22 A Brief History of Time

Seven unreleased tracks to reflect about time and its different representations, born around Stephen Hawking’s theories and the poetry of T.S. Eliot. 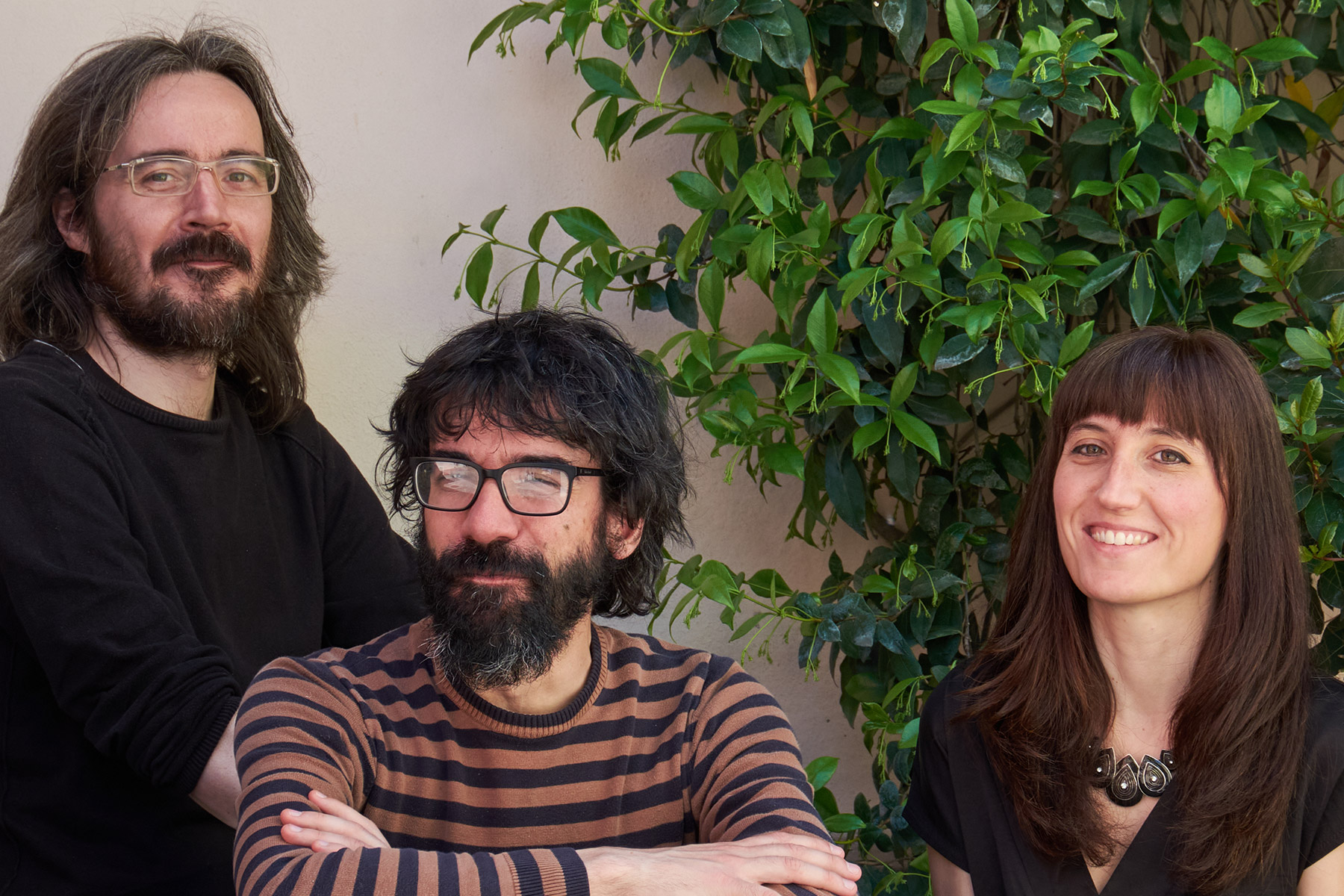 A brief history of time, is the first album of Entanglement Trio: a project unreleased, born from a reflection on the concepts of space and time inspired by Stephen Hawking’s theories – contained in the famous printed of the scientist – and from the first section of the Four Quartets of T.S. Eliot.

Seven tracks that investigate the sound in its process of evolution from simple to layered and complex element. A composition in which written and improvised moments are alternated.

In this project the musical ensemble composed of Beatrice Arrigoni (voice), Matteo Lorito (bass and live electronics), Andrea Ruggeri (drums and percussions) explored the multiple relationships between improvisation and writing, written word and sound, acoustic and electronic, investigating the different representations of time in literature and certainly in music.

Concepts that overlap each other creating a unique vision of a central phenomenon of our existence, that Entanglement has collected and told into A brief history of time.

At the origin of the project there is the study of the poet T.S. Eliot’s work, the first section of the first of the Four Quarter. A written text that alternates abstract and philosophical observations on the concept of time and its relativistic nature, intertwined with fragments of a more intimate psychological time.

Entanglement Trio was attracted to the metric structure and the poetic form, both full of musical references, in which the trio reinterprets the place of the word.

An evolutionary process that is generated in white noise, shapeless and bearer of infinite possibilities, which give rise to the definition of the constituent elements of the musical discourse.

The trio affirms “This idea finds its roots in a cosmogonic metaphor of the creation of musical language. We tried to imagine it in this way: like a Big Bang from which matter, initially informed is born, takes shape and begins to build the complex network of relationships, which gives life to the universe of sounds. Inside these processes an essential role is played by electronics.

This formal structure it allowed us to organize the improvisational process in a more consistent and effective way, thanks also to the comparison with predetermined written material. From a completely free improvisation phase, without predetermined elements, with a high level of predetermination up to the most subtle degree of improvisation during playing a piece totally written”. 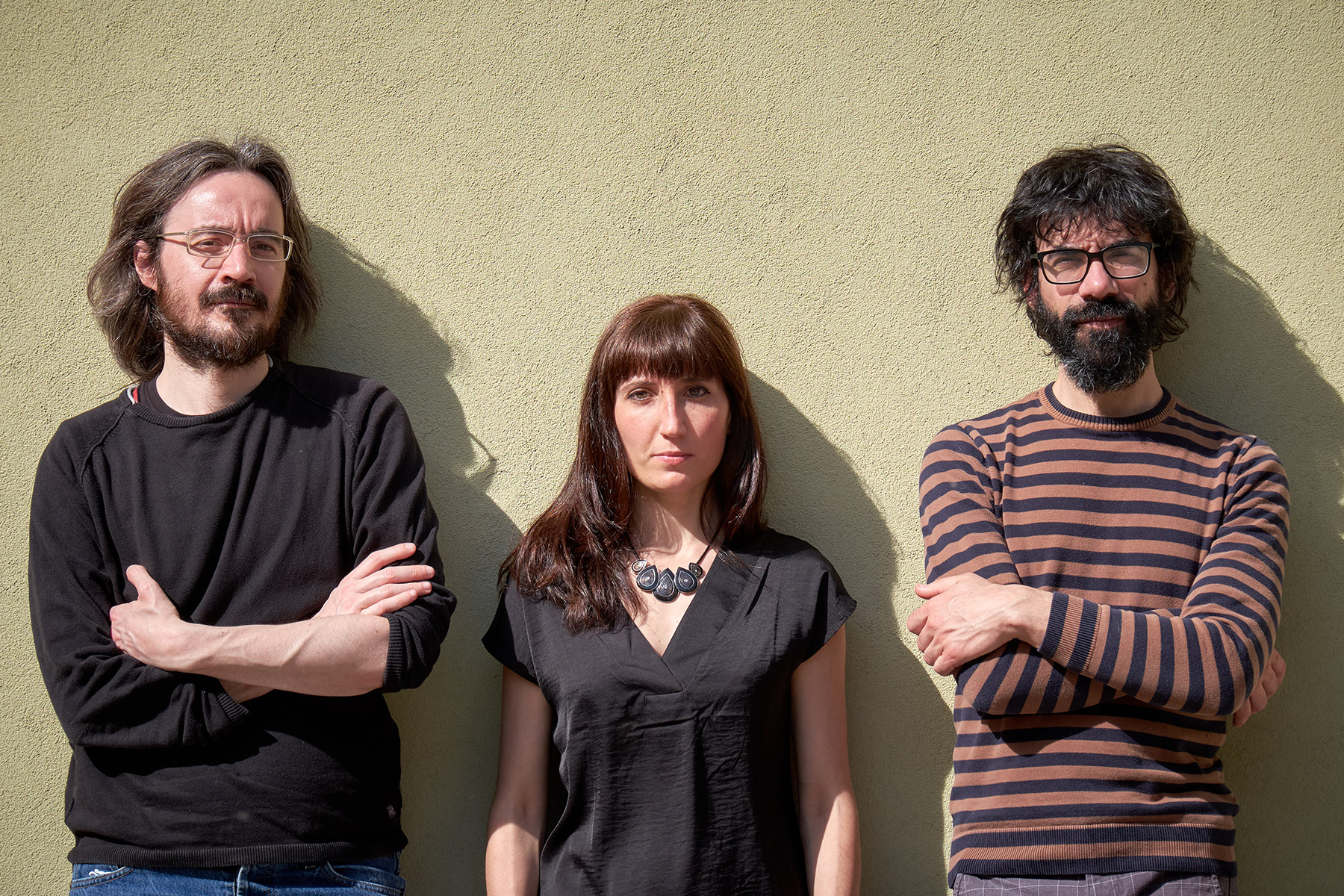 Entanglement is a group of improvisers dedicated to the exploration of materials, made by exploring the possibilities of their own instruments in order to create complex and articulated music atmosphere.

This name comes from an effect of modern physics, according to which in specific experimental situations, two particles affect one another with their only presence even when they are distant, maintaining at the same time a degree of autonomy. This form of non-local interaction represents metaphorically the way this trio of performers intend improvisation. For them the collective experience of creating music, although getting substance from the expressive individual work (which fosters the autonomous generation of music material), finds its completeness in the strong interrelation and common purpose that descend from the continuous awareness of the mutual action. This condition is necessary to reach the formal definition of the act of improvisation.

Among the peculiar elements of their work, there’s for sure the path of investigation of the relation between improvisation and written page, contextually to the development of a collective language (thanks to a deep sound analysis too). This process starts from the consideration and the consequent question about the identity of the instrumental sound, crystallized in the stillness of the lutes, this way leading to results made possible by the magnifying power of the electronic instrument too.

o1. Time Present/Echoes
In this opening piece we witness the presentation of the material which characterizes the evolution of all the work. Through the electronic track, in the first part the primordial sound matter is introduced: white noise, vocal echoes that become saturated to the breaking point.
This is the moment where the generation of the elements begins which constitute the sound and which will then organize themselves in the parameters of musical language: the height, the duration, the spectral nature of the sounds which will become harmony, melody, rhythm and timbre.
After the chaos that follows the birth of time (TIME!) we are witnessing the crystallization process of sound elements that in the primeval phase they were all present at the same time and that in the course of the entire work they will find their own identity.
The first element that crystallizes is height, which is explored by the voice with the non-tempered melodic proceeding, which overlaps the polyrhythmic and polytimbral stasis of the other instruments.
These proceed in the search for their own identity exploring heuristically the possibilities offered by the materials until find a stability, which will be reached with the evolution of the discussion in the following sections.
At the conclusion of this initial journey the element of height will have found its identity in the tempered form, constituting the dodecaphonic material without harmonic gravitational centers on which the following sections will be based.
From here we move on to the second evolutionary phase in which we witness the crystallization of rhythm, understood as a metric articulation of the temporal space.
At first, in fact, we heard many polyrhythmic fragments which then find their own fixity in welcoming a precise pattern, which will support the subsequent improvisation based on a dodecaphonic melody.

o2. Hidden Music
In this piece, there is the crystallization of instrumental identities, in the form of improvisations soloists. Here the drums and vocals explore their own tonal identity, to make it explicitly defined.
At the end of the piece, there is the intervention of electronic medium, which collects all the elements that appeared in this first phase and makes a sum, processing an electronic track which marks the conclusion of the first part of the album, still leaving open many possibilities that will find concreteness only in the following pieces.

o3. Formal Pattern
From this track begins the second part of the disc, in which the constituent elements of sound they have now reached their own stability and a process of complexification of relationships begins between the different parameters.
The overall shape of this second part recalls that of the ancient rondò shape, in which different sections are interspersed with the same theme, which plays the role of guiding thread.
In this case, all four pieces of this second part will be preceded by an interlude, who will play the role of reference, highlighting the cyclical nature of time thanks to the eternal return of an element constant.
Predefined shapes come into play and improvisational freedom is limited in terms of materials and possible solutions. In all these passages the goal is to suggest materials and introduce limitations to improvisational freedoms, to guide the group towards common compositional goals.
In this first of the four written pieces, the compositional principle of phasing is explored, that is a continuous rhythmic shift of the same rhythmic pattern, overlapping on itself.
So, the theme is rhythmic and metric development, while the other elements remain fixed throughout the section.

o4. Sunlight
In this piece, the harmonic and contrapuntal element is explored, in which the other aspects move to the background. It is based on the polyphonic use of the double bass, that accompanies the melodic burning of the voice, like a harmonic instrument.

o5. The Surface
In this piece the timbre element is explored. The piece is organized on several levels, where the double bass and the drums are alternated to provide rhythmic and timbral support to the excursions of the voice in a phonatory path which goes from soft singing to declamation and in counterpoint with its own electronic processing. The hub is represented in the central part where the voice remains alone with the electronic track.
This represents the formal climax of the whole album, where the processes on the materials are almost complete.

o6. A Cloud
In this piece the elements of Sunlight return to bring the double bass to the solo, the last timbral element that was still missing to be defined and that it was absent in the triggered processes in Hidden Music. The form is nearing its conclusion where all the elements find their own fulfillment.

o7. Eternally Present
In this piece we have the conclusion, which actually recalls the beginning of the disc, because “[…]And time future contained in time past[…]”.
The piece is a free improvisation, in which musicians can regain total freedom, after passing through the constraints of the previous songs. However, this freedom is controlled and mediated by the awareness of the materials used in all the previous passages.
So the condition is similar to the beginning of the disc, but thanks to the path followed by the musicians, freedom is more aware and responsibly controlled, with a compositional control on the materials that was deliberately not present at the beginning.
The interlude theme definitively closes the circle, suggesting a new beginning, which actually there will not be.