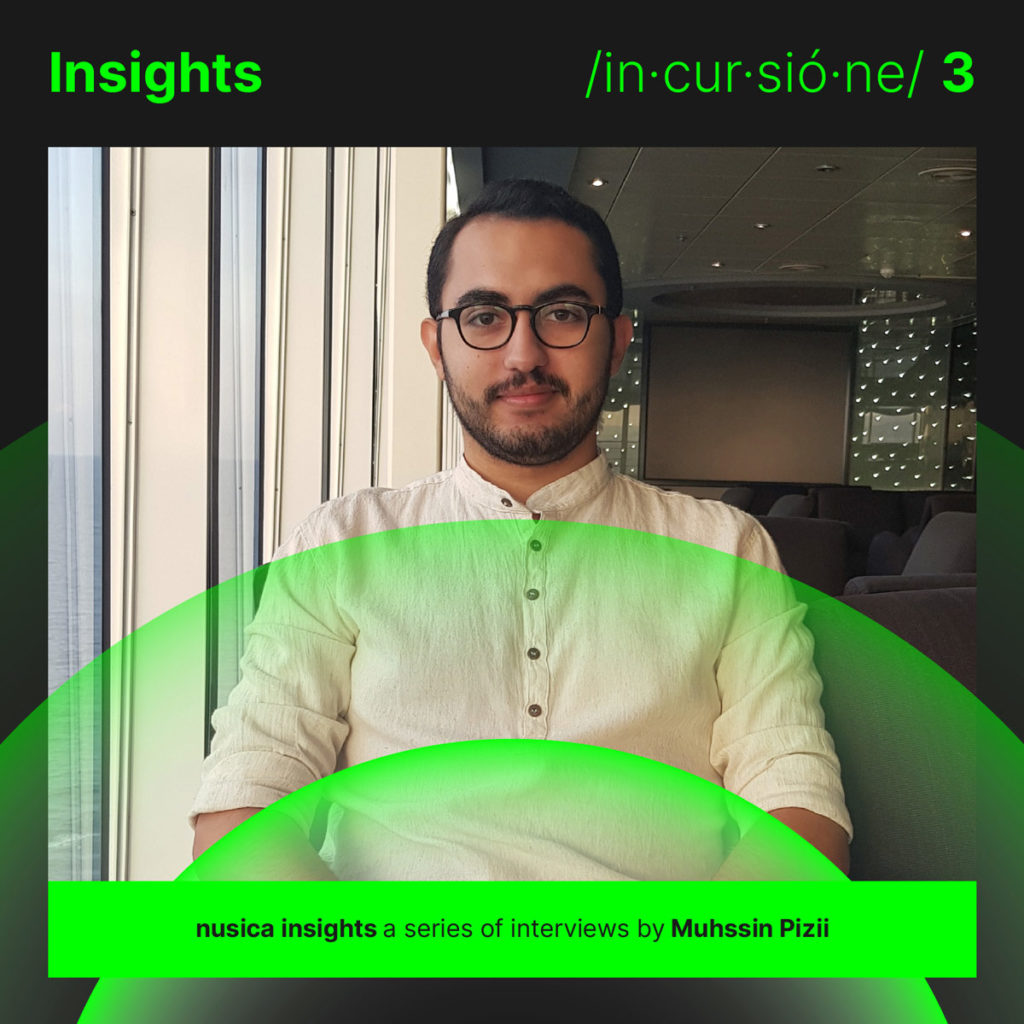 Nusica insights is a new project by nusica.org and curated by Muhssin Pizii which has as its main goals to suggest new contents by focusing on new perspectives on musical composition and improvisation.

Those contents will be avaible as videos of interviews of artists and composers from the Jazz, New Music, Electronic and Contemporary international scene in which they will discuss about their own compositions, some techniques that they developed or still are developing and about their artistic collaborations.

In addition there’ll be published some essays that will focus on some aspects of the 21th century music  composition and improvisation by going deeply on some new techniques and by proposing new concepts based on this aestethic.

Muhssin Pizii is a guitarist and composer born in Rome in the 1998 and grown up in Pescara. He started to formarly study the guitar at the age of 12 and, 5 years later, he founds interest to study Jazz music. While studying to get his Bachelor Degree in Jazz Guitar at the Conservatory “U. Giordano” in Rodi Garganico with the Maestro Antonio Tosques, thanks to the Maestro Stefano Taglietti and the Maestro Nicola Fazzini he starts to develop a deep interest in the music of the 20th Century and begins to research and analyze the techniques and the aesthetic of the composers of the Second Viennese School, the Darmstadt, the first serialist, the “Ultramodern” and 12-tone composers before and after the two World Wars.

During his researches, in particular after getting a baritone guitar with a 24 notes per octave (24 EDO) built by the Master luthier Domenico Moffa, he extends his interests to the study and research of different fields of Microtonality: from the work of european theorist like Nicola Vicentino  to the modern pioneers of the Just Intonation like Harry Partch, Ben Johnston and Marc Sabat but by not forgetting the great work of composers and theorist of different kinds of EDO like Ivan Wyschnedrasky or Alois Haba.

Now he continues his studies to get the Master Degree in Jazz Guitar at the Conservatory of Music “G. Verdi” in Milan with the Maestro Roberto Cecchetto and continues his research on composition and improvvisation.