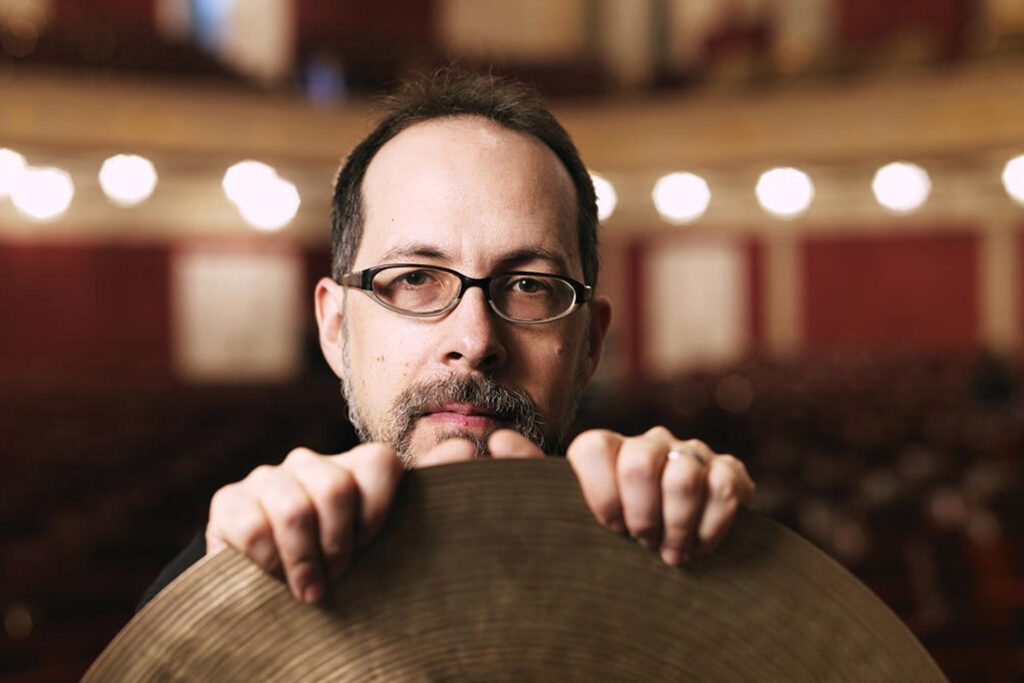 Hi John, first thank you for the time you will dedicate to us. The idea is to introduce the vision of different artists about composing, improvising and researching in music, mostly in jazz.
Great idea!

1. In your career you have worked with many different bands: from duo to the big band and your style, your music is very unique and peculiar.
How do you compose, do you use the computer or do you write on paper on the piano, do you have a routine or do you follow the inspiration of the moment?
It has been a natural inclination for me to want each piece I write to be unique. So a long time ago, I started to think about the process and how making each process unique would give the pieces a better chance of themselves being unique. When I was in that void after school where I had lost all of my network (fellow student musicians) and reasons to write, I stopped composing and spent some time thinking about composition, taking it apart part by part. And then I made lists about each aspect by asking questions and writing down the results of what I have done, what I could do and what others have done. The questions: What have I been inspired by? What are the tools I use to compose (like the computer, paper, piano for instance)? How do I start composing? What do I start with (melody, rhythm, harmony for instance)? Once I find this “seed”, how do I process them? So in general, I try to let each piece have its own routine!

2. About composition and improvisation: can you explain to us your approach and how do you balance these two aspects? How do you match together the complexity of composing with the spontaneity of the improvisation?
I’ve always been attracted to improvisations that sound “composed” and compositions that sound “improvised”. Unlike many fellow “jazz” musicians, I’m ok with something being 100% improvised or 100% composed. It is important to me that including either one in my playing and composing is not automatic or simply habitual. But I’m often writing for “improvisers” and for listeners that like to listen to “jazz”. Knowing that improvisation is important, I usually do include it in my compositions. I try to think about what the role of the improvisation is in a piece and how it can be incorporated into the “guts” of the compositions to help it. Also, I don’t think it makes sense to tell Chris Speed, for instance, how to improvise, instead I try to set up an environment that will inspire Chris.

3. I think that in your music it’s possible to find many different influences: jazz, electronic music, classical music, pop music, minimalism and aspects of world music. How do you relate to these different styles?
I simply like them all equally. I have the most practice and knowledge of Jazz but I’m continually trying to learn more and more about other styles. Recently, I was finally able to start dealing with my deficiency in rap music and listened to it and watch documentaries for two weeks. Obviously this is just the beginning, but I feel much better now about that and learned a lot and really like a lot of that music. I’m open to all of those influences and honestly don’t think about it much when composing.

4. I think that Bob Brookmeyer and Meredith Monk are two artists that have an important role in your career, can you tell what kind of impact these two figures had on your artistic vision?
Those two along with my brother Pat are my Holy Trinity! Bob and Meredith are guiding lights that showed me how to be a musician and specifically a musician/composer. Both have been so nice and generous to me. Although we lost Bob, he is still helping and encouraging me! I’m now trying to be that type of person for my students. It is important to note that artistically both never stop creating, experimenting and going forward. When you keep trying new things that makes you very vulnerable. Seeing that vulnerability in composers at their age and stature is incredibly inspirational. Lastly, they have been mentors to me, and mentors are very important to the growth of a musician. I always encourage my students to seek out potential mentors.

5. Can you tell us what is your approach to the jazz tradition? What is the balance between tradition and innovation in your vision of music?
You will find many definitions of jazz. Innovating and experimenting to create something that is so intangible that it has not been named or codified is how I would define jazz. From my early years, I just thought jazz was the sound of “What is that?” I do think that it can only help any musician to study jazz and gain a foundation in it through learning the tradition. The rhythmic and improvisational practices alone give it extreme weight. After studying and learning this, a musician can more easily navigate other styles. I’m working on a new program for my school, McGill. And it is essentially for a musician who already studied classical music but then, for various reasons, will not actually be a professional classical musician. In Montreal, a young musician like there will often find themselves in an alt.rock band for instance. Suddenly they need to play without a conductor and groove, they need to improvise, to use technology. These are skills that most students who study jazz are proficient at. So as I’m putting this program together, I realize that what they need is a Jazz-“lite” program. They don’t have to learn Giant Steps, but taking improvisation classes, playing in Brazilian ensembles, etc. will get them ready for endless possibilities. If you look at many alt.rock bands at the moment, you will find many musicians who have a degree in Jazz.

6. What are you listening to in this period? Which artists are, in your opinion, doing something innovative and interesting today?
As I mentioned above, I’ve been listening to rap a lot. For a few days, I was obsessed with the chorus to Shook Ones Pt. II by Mobb Deep. Here, is a video of me playing to it for fun. LINK AL VIDEO >

Since we all have to stay home now, I’ve been watching more than listening. There are some great documentaries, like one on Charlie Haden called Rambling Boy; also I re-watched the Milford Graves documentary (amazing!) and just finished one about Errol Gardner. I also had a funny thing happen as I was watching this Fred Hersch documentary – all of sudden, there I was! I had forgotten that there was a camera crew around for the premiere of Coma Dreams. Fred is incredible, so resilient! On a different note, I also found this young band called Black Midi and I really enjoy listening to them. I’m also trying to watch all the movies that Johann Johannsson scored, I love his music! As soon as I’m done writing this, I’m going to check out the new Childish Gambino. But I have to be honest and say that I always check these articles with titles like, “the 20 most innovative musicians in 2020” and I’m often disappointed (Black Midi was an exception!). I think you have to dig a little deeper to really find the innovators at the moment, because if someone is really innovating, usually it is not popular enough to warrant an article in a major newspaper or magazine. Curtis Hasselbring gave me a t-shirt from the Schoenberg Center that says „Neue Musik ist niemals von allem Anfang an schön“. It takes a while for people to catch up to real innovation, as they say some things come “before their time”. Think about the Rite of Spring being so crazy at the time that it created riots in the audience. Now it is like “tradition contemporary classical music”, I’m guessing you can even hear it as muzak somewhere!