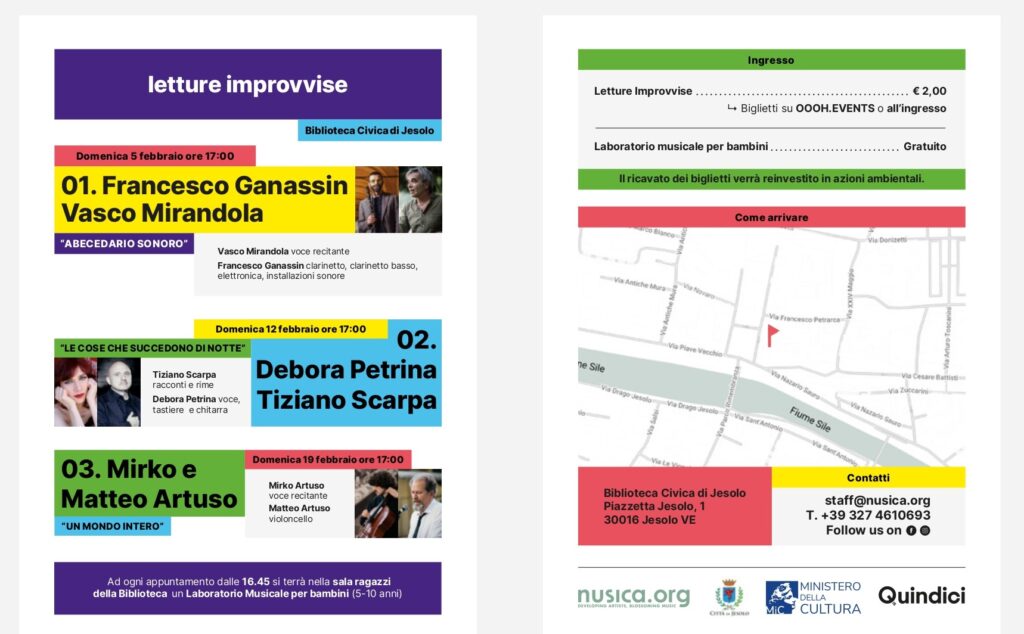 February sees the arrival of the first edition of Letture Improvvise: three events organized by nusica.org that for three Sundays, Feb. 5, 12 and 19 at 5 p.m. bring new stories and new music that are born out of the blue, all to be listened to and for everyone, to the Jesolo Municipal Library. A new review that combines readings and improvised music, designed to bring people, ideas and artistic forms closer together and unite them, to experience together, young and old, the places of culture such as libraries, landmarks of the city and the community.

The three concert-readings will feature the original and engaging “Abbecedario sonoro” by Francesco Ganassin and Vasco Mirandola (Sunday, Feb. 5); the songs and stories of men, trees, and animals seeking love and truth in “Le cose che succedono di notte” by Tiziano Scarpa and Debora Petrina (Sunday, Feb. 12); three centenarian authors, Pier Paolo Pasolini, Dino Buzzati, Luigi Meneghello and their words in their relationship with music in “Un mondo intero” by Mirko Artuso and Matteo Artuso (Sunday, Feb. 19).
(Tickets: € 2.00 available at OOOH.EVENTS or at the door; for information email staff@nusica.org; tel 327.4610693).

At the same time as the impromptu readings, music workshops will be held for the creative little ones (ages 5-10) from 4:45 p.m. until the conclusion of the readings: on Feb. 5 and Feb. 19 the workshop will be curated by Luigi Mosso, on Feb. 12 by Emanuele Ruggiero. Admission is free with reservations at staff@nusica.org

Abbecedario Sonoro is a little book about sound, listening and walking, playing and teaching. The presentations of the book, with the complicity of Vasco Mirandola, become something difficult to define: an expressive experience that is accomplished on multiple levels, the texture of sound sculptures in an environment, the sound of wood from clarinets, improvisation, the rippling sound synthesis of electronics, the acoustic nature of a location, the emotional response and interaction with an audience. It is by necessity something site-specific and site responsive, each time different and new…
(book here: Letture Improvvise – Francesco Ganassin e Vasco Mirandola | OOOH.Events | Biglietteria online per eventi SIAE, corsi, fiere)

Debora Petrina, singer-songwriter and composer, meets Tiziano Scarpa’s stories. On stage they alternate between songs and rhyming stories. On keyboards, guitar and voice, Debora gets in touch with unknown worlds; she is a kind of electronic seer. She sings with a spellbinding stage presence her innovative, beautiful songs that exude warm sensuality and lively rhythms. Between songs she accompanies Titian’s words about men, trees, and animals seeking love and truth. These are stories from his book A City Dragonfly.
(Book here: Letture Improvvise: Debora Petrina e Tiziano Scarpa | OOOH.Events | Biglietteria online per eventi SIAE, corsi, fiere)

Three authors, three centenarians, their words in their relationship with music: Pier Paolo Pasolini, Dino Buzzati and Luigi Meneghello.
The study of the Manifesto for a New Theater and in-depth study of Pasolini’s texts, his poems, his cinema, allowed Mirko Artuso to define this reading, staging the splitting of his characters. The drama of the bourgeoisie of which Pasolini is interpreter and, at the same time spectator, is comparable to the painting Las Meninas in which Velazquez paints himself while portraying the royal family. Pasolini like Velazquez describes the characters in his stories and, at the same time, identifies with their lives. A hymn to life and primal instincts. The Dove is a short story by Dino Buzzati from which the reading stems. It is avidly read and gives the title to the entire collection that came out in 1966, in which the themes dearest to the writer are re-presented: the representation of fleeing time, the anguish of waiting, the absurdity of existence, and the sense of defeat. At the center of the scene is the relationship between music and imagination, individual and power, between doubt and bewilderment in a constant alternation between reality and hallucination, crossing different identities and social contexts. The raids, the games behind the little wall, the homemade theater on top of an improvised stage, the first motorcycle rides and the discovery of the adult world made of hard work and ingenuity. The pure fun of games – children. Children who later become adults: between those who stay in the village and those who leave, all told with the sweet musicality of dialect by Luigi Meneghello. The very use of dialect is a re-appropriation of childhood as a central moment for decoding the meaning of life that languishes toward melancholy. All that is done is to rehash episodes that by now even the wives know by heart. They may be worn-out stories, but they will live as long as someone remembers them.
(Book here: Letture Improvvise: Mirko Artuso e Matteo Artuso | OOOH.Events | Biglietteria online per eventi SIAE, corsi, fiere)

a project of nusica.org
with the support of the Ministry of Culture and the City of Jesolo