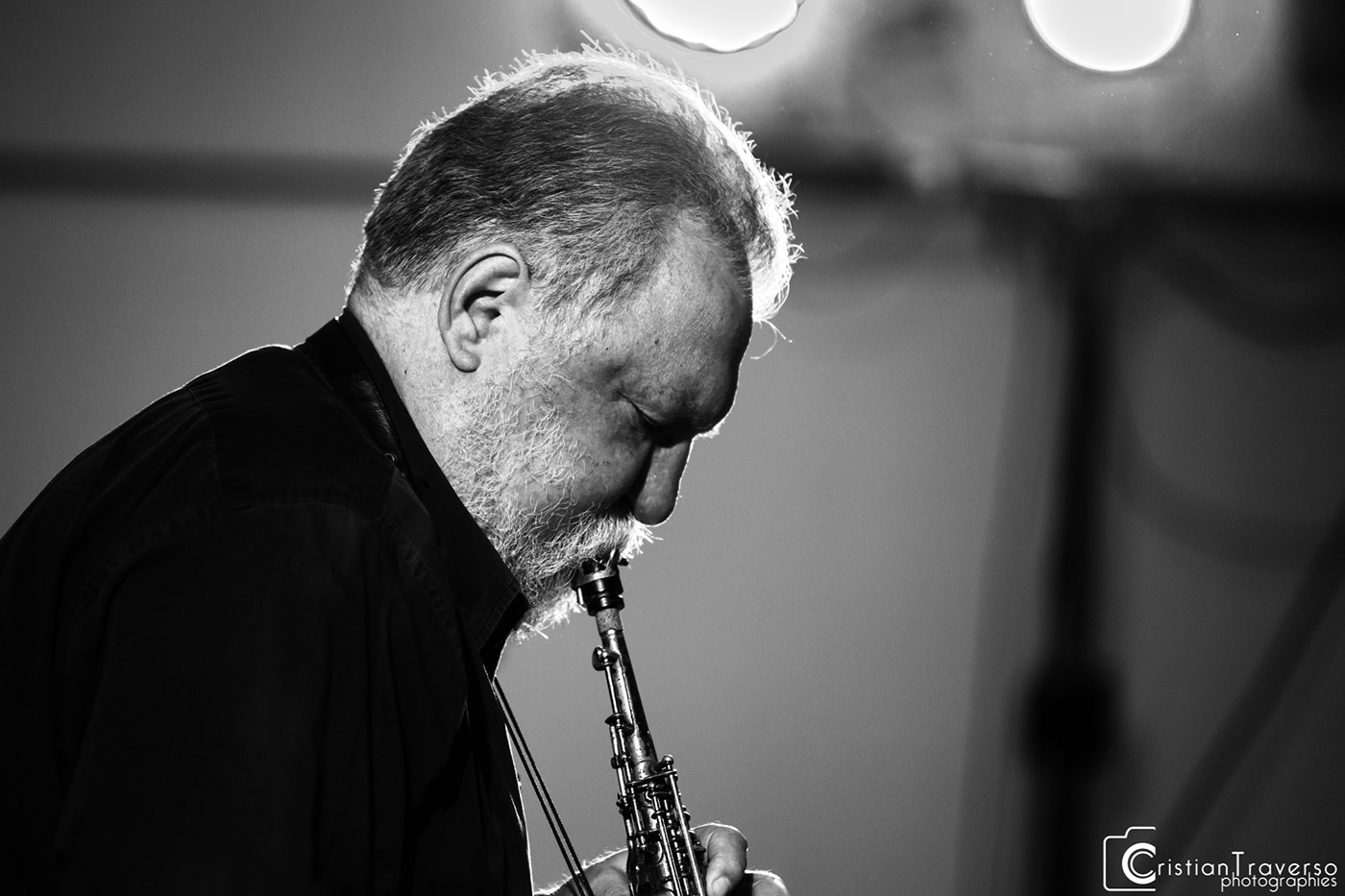 Evan Parker is one of the most creative and influent voice in the jazz scene.
The British saxophonist has played an absolutely relevant role in the development of the European-free jazz scene, but not only. We are very proud to have the chance to interview him about music, composition, improvisation and much more.

Nicola Fazzini: I had the pleasure to attend three residence’s sessions of yours in the year 2017. It was very interesting your approach with the students of the Universities of Venice and Padova. Improvisation, conduction, composition. Could you explain us your approach and how do you balance these aspects?
Evan Parker: I try to avoid a formulaic approach. So much of how I work depends upon the people, the instruments, the physical lay-out of the room, the acoustics. From these parameters I take a “reading”. Then the first idea comes to me and I start from there. Nothing else is absolutely fixed in advance but certain ideas may be used in similar situations. You could say I approach it like I approach playing solo.

NF: How do you match in your music the complexity of composing with the spontaneity of the improvisation?
EP: Again, the same principles apply. The room, the people, the acoustics. My approach to playing solo is in effect a dialogue with the instrument which is modulated by those other considerations. I have certain familiar regions which I can visit in sequence and then hope for something unexpected to take me to a new room in the “theatre of memory”.

NF: I’ve heard your solo performance many times and is really impressive the use you do of the musical material you develop in it: what were your influences for this and can you give us an idea about how and what kind of techniques you mix together?
EP: The physics of reed behaviour is affected by the acoustics of the room in which the reed’s vibrations are amplified by the conical air column of a saxophone?
Lately I have come to think that there is a coupling effect that makes it very difficult to decide what is a “good reed” in isolation from the acoustic in which it is played. The behaviour of broken columns aka cross fingerings – holes open in the tube higher in the column than holes which are closed opens the way to notes above the range, multiphonics and micro-tonal tunings. Saint Michael’s, the church in Turnham Green, London, where I recorded the music that was released on CD as “Lines Burnt in Light” had very special acoustic properties. It was as though by directing the instrument towards different spots on the complex boundaries I felt I could leave a particular pitch ringing on while by a new orientation I could move on to find another niche
and in the course of the music build up a mental map of the space in a way analogous to the use of architectural space in the Memory Theatres of antiquity described by Frances Yates. Of course the results were only partially captured in the stereo recording.

NF: How do you organize your work to develop these ideas?
EP: I have no specific method of organisation which is independent of the specific situation in which I play: again the people, the space, the acoustics.

NF: and how do you practice them?
EP: My practice is concerned with maintaining a confident relationship in control of the instrument. I practice across the whole gamut, from the memorization of existing material: at the moment Dolphy, Monk, Lacy,Monk.*
The development and memorization of self- invented patterns largely concerned with
patterns generated by limited interval types, tone rows etc.
Then the usual scales and arpeggios. Then the purely physical relationship for maintaining a good embouchure, control of overtone selection using material derived from Rascher.

NF: What is your approach in sharing these concepts with musicians who play in larger ensemble with you?
EP: This would be determined by the specifics of the ensemble and of the context in which we are to play. I prefer to say as little as possible and I usually organize things so that this is a viable approach.

NF: As the historian Hobsbawm said, there are traditions that have been “invented” and the meaning of tradition in itself is somehow artificial. In fact, not all cultures consider or give a meaning to this concept. Do you think that it makes sense to speak about a “jazz tradition” for a type of music with such a short history? What is your approach to the jazz tradition? What is the balance between tradition and innovation in your vision of music?
EP: This is a question that requires a book length answer. There are forms of jazz which mean very little to me and others which are my main reason (still) for playing. See the practical answer and add names like Coltrane, Giuffre, Milford Graves, Cecil Taylor.

NF: The idea of research in music had a particular value in the last century, especially in the classical modern and contemporary fields. Maybe not engaging a massive audience, but it was considered with respect from musicians, experts and institutions. My feeling, especially in Europe, is that this sensibility has moved toward social aspects: gender balance, supporting young talents, audience development and new media and technology support.
What is your feeling about this and do you think that it makes some sense nowadays to speak about avant-garde and research in music?
EP: Research. Bach called parts of his Musical Offering Ricercar. Research is a term which has many ways of being understood. I think my previous answers give a good idea of how I understand it. Many colleagues who would like simply to be researching performers are obliged to work as teachers in order to earn a living. The dependence on subsidy to make performances of uncommercial music professionally viable gives all of the issues you detail an unwarranted importance when seen from a purely creative perspective.

NF: What do you think about Jazz in Europe? Have European jazz musicians developed a particular identity?
EP: I prefer not to generalise in this way. My interest is in individuals regardless of the global origins or the culture in which they were raised. Is Okkyung Lee still Korean? is Tristan Honsinger still American?

NF: What are you listening to in this period? Which artists are, in your opinion, doing something innovative and interesting today?
EP: This can become an exercise in esotericism. I can truthfully say that my listening today started with a CD transfer of an old classic LP of Korean traditional music a sanjo (duet with percussion) for ajaeng (bowed zither). This was followed by some Lee Konitz with Warne Marsh Topsy etc. Then I checked a recording of frogs to make sure it was not one of those environmental recordings with kitsch synthetiser music.
It was just frogs and so good that I listened to all of it.
Then I did some practice with more Konitz in the background – not playing with him but working on other stuff see above. After that I settled into a solid Bach programme. The keyboard studies played by Malcolm Proud on organ, the Musical Offering in the version by the Camerata Kilkenny and finished with one of Maya Homburger’s recording of Bach Sonatas and Partitas and Barry Guy’s Aglais.
Tomorrow is another day!